The post my biggest fan has been waiting for 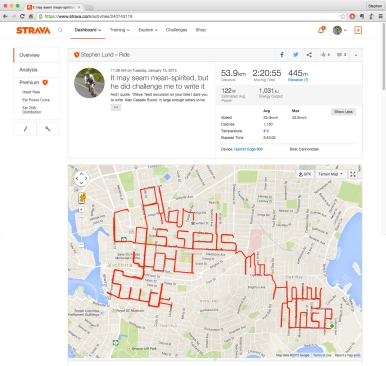 Yes, Alan Cassels sucks. Even he admits it. To find out why, click, read and enjoy!

Okay – before you jump to any conclusions (like “Holy smokes, that Strava artist is mean-spirited SOB!”), let me tell you about Alan “Mr. Hairy Nose” Cassels and how he earned this 54-kilometre dressing down.

Alan is a fellow Tripleshotter and a fellow writer, but when it comes to appreciating the vision and passion that together drive the pursuit of Strava artistry, he’s a Philistine.

In response to an early bike-writing effort that I posted on our club forum, he penned a feeble poem suggesting I’m an ADHD-stricken “Strava-spewing junkie.” When I responded with a poem of my own*, he extended this invitation:

Next excursion on your bike I dare you to write ‘Alan Cassels Sucks’ in large enough letters to be readable from the space station…and while you’re at it, might as well write ‘and he’s slow, and mildly feminine and never wins the sprint and he cuts his own hair and wears clothes that don’t fit, and has hairy nostrils and, and, and…’ Dare ya.

* If you’re interested in reading Alan’s poem, my rebuttal and the bike-writing effort that started it all, click here and enjoy! It’s really quite hilarious.