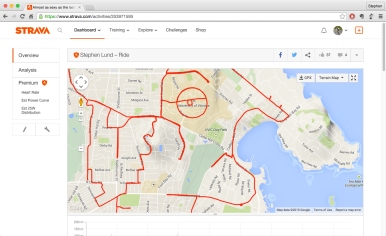 Including a few fine details (like my West Coast witch‘s chin wart and nose hairs) will add another dimension of impressiveness to your Strava doodles.

After I scrawled a bike-writing message on the cobbled streets of Bucerias a couple days ago, a fellow Strava member commented, “I just noticed the accented e’s – that’s attention to detail!”

I heard similar remarks after I sketched Wicked witch of the West Coast (“Geez – she’s even got a wart on her chin and a couple hideous hairs growing out of her nose!”) and my Strava giraffe (“When I zoomed in, I saw that you went up and down both sides of the highway to make the fringe of the giraffe’s tail. Impressive!”)

Yes, there is beauty in simplicity; and I’ve seen many outstanding Strava doodles free of “warts and whiskers.” But in my limited experience as a Strava doodler, I’ve found the creations that get the most exuberant reviews and draw the most enthusiastic expressions of awe are those that include a few small but thoughtful details.

Brand strategist and creative director by day. Hyper-competitive GPS-art obsessed cyclist most of the rest of the time.
View all posts by Stephen →
This entry was posted in gps art, how to, tips & tricks and tagged artistic details, bicycle, bicycling, creativity, cycling, garmin, gps, gps art, how to, strava, strava art, tips & tricks, witch. Bookmark the permalink.