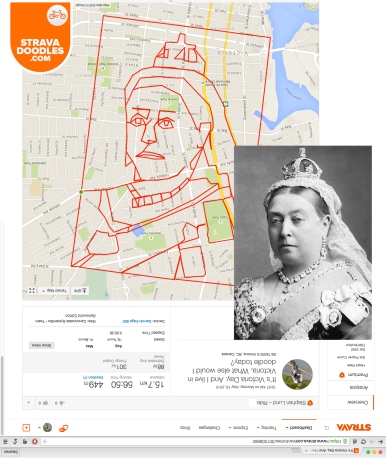 A portrait of Queen Victoria, doodled on Victoria Day 2015 in Victoria, BC by GPS artist Stephen Lund and his bicycle. Total distance cycled to create the portrait: around 85 kilometres.

Today is Victoria Day – a Canadian holiday celebrated on the last Monday before May 25 in honour of Queen Victoria’s birthday.

And I live in Victoria, British Columbia – a city named after Queen Victoria.

It was only fitting, then, that I dedicate the day’s GPS doodle to Queen Victoria, the longest reigning British Monarch (63 years, 216 days) and great-great-grandmother of Queen Elizabeth II (whose current reign of 63 years, 101 days is a very close second).

I’m not entirely thrilled with the portrait – I feel my GPS doodle of Queen Elizabeth II a couple weeks ago was a much better likeness. But until Victoria Day 2016, it’ll have to do.