A GPS Nod to a Worthy Adversary 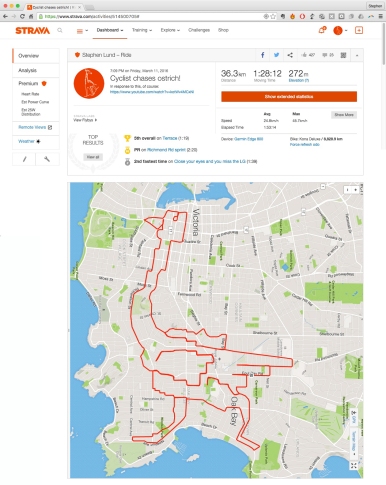 As a long-time cyclist, I’ve had my fair share of run-ins and close-calls with critters both wild and domestic. I’ve had bees in my helmet and wasps in my jersey; I’ve been swooped by hawks and harassed by ravens; I’ve narrowly avoided deer, and I’ve had to bunny-hop over raccoons and prairie dogs.

But it all pales in comparison to this: Cyclists chased by an ostrich…

While that rampaging ostrich didn’t have the legs to win the sprint, it has proven to be a worthy adversary in other ways. You see, for a couple weeks before he trotted along, GPSdoodles.com seemed to be the hottest thing on the Internet. Then along came a flightless bird with an appetite for Spandex…

How’s a GPS doodler supposed to compete with that?

See it on Strava *

* Note: The GPS points will render correctly only if you are logged in at Strava.com

Brand strategist and creative director by day. Hyper-competitive GPS-art obsessed cyclist most of the rest of the time.
View all posts by Stephen →
This entry was posted in gps art and tagged animals, birds, creativity, cycling, garmin, gps, gps art, ostrich, strava, strava art, victoria bc, wildlife. Bookmark the permalink.

1 Response to A GPS Nod to a Worthy Adversary